Have you ever installed an original iPhone screen into your customer’s phone only to find that the touch isn’t working? Or perhaps the touch was okay when you checked it. But your customer still comes back the next day saying it has stopped working or typing by itself? It’s easy to blame this problem on a faulty screen, but it may not be as simple as that!

If the screen on your iPhone doesn’t respond to touch or if your display is too sensitive or typing by itself. Apple says that is usually a software issue and you might need to force restart your device.

You can find more information about this issue on Apple website.

If it doesn’t help maybe the screen has Touch Compatibility Issues with iPhone Screens.

We use these screens for our iPhone repairs.

Although the LCDs themselves are made to Apple’s strict specification, compatibility between iPhone devices varies greatly. If you look at the 3D touch panel, there is a long serial code which might not look like it means anything but can be decoded to the following. The first three letters identify the maker of the LCD and 3D touch panel. The remaining digits are the serial- unique to that LCD. This information is also contained in the QR code on the back of the screen. Plus this is recorded in Apple’s GSX server against the IMEI and the serial number of the device.

This is one of the ways Apple can tell if the iPhone has ever had the screen changed. 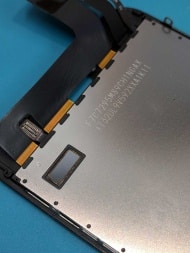 It would be fair to say that if Toshiba manufactured the LCD they would also manufacture the 3D touch panel that is attached to the LCD. This would be the same for LG and Sharp.

When the iPhone is made in the factory and the first screen is installed, Apple uses a special calibration machine to calibrate the iPhone to work with the screen.

We believe a similar machine is used if you ever take an iPhone direct to Apple for a screen replacement. At this point, it doesn’t matter whether the iPhone gets an LG, Toshiba or Sharp LCD. As the calibration machine will make sure it is configured correctly. Sometimes the calibrated screen has touch issue, too.

If the iPhone was calibrated for a Toshiba or Sharp screen and you cross install between these 2 manufacturers. There is roughly a 5% chance of a bad touch and the type by itself. If the iPhone was originally calibrated for an LG screen and you cross install with a Toshiba or Sharp screen then there is a 50% chance of touch problems because LG’s sensitivity range distribution is very different to these 2 manufacturers.

Without having the magic calibration box to tell the iPhone you’ve installed a different manufacturer’s screen you are going to have trouble unless you install an LG screen. This probably explains why, if you install a screen and experience touch problems, then install another screen and it works, you’d automatically assume a bad screen.

However, it is possible you’ve just switched manufacturer and got lucky. If you used the suspected bad screen in the next repair it would more than likely work with no issues.

When you bring your phone to us at iPhone Repair Base to replace the screen and someone has changed the screen on it before and they have used a non-genuine screen (LG/Sharp/Toshiba) we give you a high quality (copy) screen only.

Because, we don’t know what was the original screen and if we give you a different one touch compatibility issue can come up on the screen. This problem never happens with high quality screens so this is the best solution in this situation.